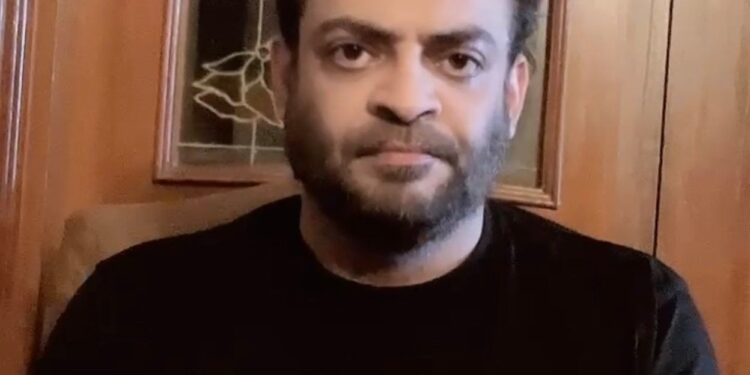 Aamir Liaquat Hussain, who recently announced his decision to leave PTI amidst rising political turmoil in the country, took to Twitter to share a video message directed at Imran Khan.

Wearing a t-shirt that read “go away” in a bold font, the TV personality, obviously enraged, took issue with being deemed a “traitor”.

He stated in his message, “Khan Sahab, I wish to tell you that none of us is a traitor. We are not traitors. You have deemed the members of the National Assembly traitors. And me? I wasn’t even part of the voting. I had a heart-related issue and was in the hospital. By the time I got there, it was too late, the doors had been closed.”

Following the video message, Liaquat was mercilessly trolled, with some users taking offence at his use of inappropriate language in his tweets.

In the aforementioned video, Liaquat added, sharing how his loyalties have shifted to the establishment, “I never voted, and you deemed me a traitor? Now I will vote! Until yesterday, I was with you, traitor. Now I will be with those who are not traitors.”

“You tried to remove General Bajwa from his post. I bear witness that you called me to you and told me that you are planning his removal yourself,” he asserted, adding, “This is a very big statement I am making. I know much more, and if I choose to reveal it, there will be utter chaos.”

On Sunday, Liaquat announced his decision of leaving the Pakistan Tehreek-e-Insaf (PTI) following the dissolution of the National Assembly (NA). Taking to microblogging website Twitter, the television personality said, “After the drama is over, I want to say that what the prime minister did proved that the opposition was doing the right thing, so I am announcing to leave the PTI.”

He wondered who had deviated from the Constitution of Pakistan, adding that the Supreme Court would settle this matter. However, he added, what the opposition did was right and PPP co-chairman Asif Ali Zardari once again proved that “Pakistan is divided”.