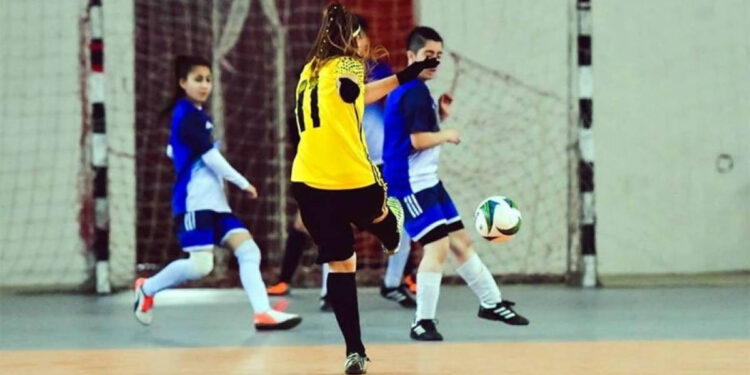 Brazilian coach Celso Luis Marques believes Pakistan can be a powerhouse in the international futsal community if the steps to develop the sport continue in the right direction.

Marques along with Coach Rubyany Brandao were in Pakistan earlier in March, as they trained at least 46 participants in the coaches and referee course organised by the Sindh Women Futsal Association (SWFA) and Diya Women Football Club (DWFC), under the umbrella of Pakistan Soccer Futsal Federation (PSFF).

“The experience of coaching in Pakistan is very good,” Marques told. “I’m very happy to see the interest and the dedication from the coaches and referees in the course.”

Marques and Brandao also spent time with the children on March 3 and 4, while they trained the coaches to further their knowledge of futsal.

Marques wasparticularly impressed with his experience in the football-mad locality of Lyari.

“I need to see a lot of places in Pakistan. Every region is different, and that makes the players different too. But I was very surprised to see Lyari, the talent of players there, their appreciation for the sport and their experience with the game as well. I can see a lot of players from there that can be a part of the national team one day,” said Marques.

The Brazilian explained why futsal is important for him and as a sport what it can do for the people who cherish it. “It is a very lovely game. Futsal is a magical sport, in which there is discipline, there is movement, there is commitment and a lot of things that make futsal very dynamic,” he said.

The PSFF President Rafique Sanjrani said that all the resources and efforts are being pooled in to develop the coaches and referees in order to make sure that the results are long lasting.

Marques said that in the first phase of the development program, he has seen a positive response.

“If everything goes well and is done in a well-organised manner, starting with the coaches and training players, Pakistan can be a very famous, very talented team in Asia and all over the world,” said Marques.

His message for the Pakistani players is to work hard and improve their level of game and ultimately play for Pakistan one day, while he said that Pakistani women are well coming into the field. “Women are doing a very nice job, they are coming into the field, into the ground. They should keep the same rhythm and be part of the team as well.”

Meanwhile, Sadia Sheikh, who is the founder of Pakistan’s first women’s football club, Diya FC, and has been an active an pioneering member of the football community, especially when it comes to women’s game, has ventured into futsal.

As the SWFA president she briefed that the contribution of SWFA and DWFC is not only exemplary but also it would definitely improve the skills and ability of players while the new talent is coming forward from Pakistan.

She thanked PSFF for extraordinary cooperation. She thanked the visiting