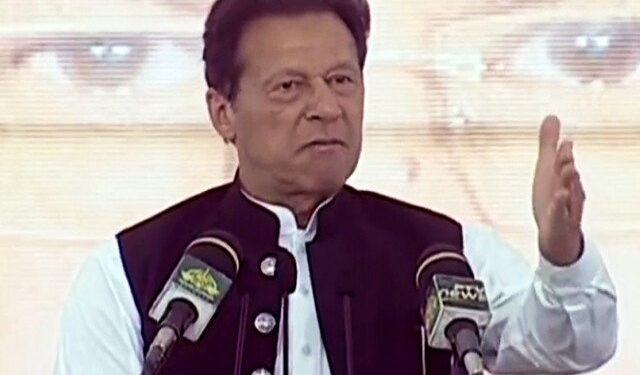 Prime Minister Imran Khan has claimed that his party will secure a clear majority in the National Assembly after next general elections, saying he will not form a coalition government at the Centre again to avoid being “blackmailed”.

Addressing a public gathering at Governor House in Lahore on Tuesday, PM Imran said that this time around Pakistan Tahreek-e-Insaf (PTI) will award party tickets only to its ideological workers after careful deliberations.

He also admitted that his party committed many mistakes in the past and paid “heavy price” for those. “However, we have learned lessons from our mistakes… by forming coalition government one has to be ‘blackmailed’ by allies,” he remarked.

PM Imran said that the Pakistani nation would teach a lesson to those “traitors” in the general elections who tried to topple an elected government for pursuing an ‘independent foreign policy’.

“The people of the country will teach a lesson to these traitors (opposition leaders) in the next general elections by burying their politics forever.”

The prime minister, referring to his main political opponents, said that these “three stooges” had been plundering the national wealth for the last thirty years and stashed it abroad. “They can say that beggars are not choosers” owing to their vested personal interests, he added.

He said a drama had been staged in the country. In a Lahore hotel, PTI defectors who had “sold” their party allegiance were put together, he said, adding that, “With such shabby tactics, democracy and future of the coming generations and solidarity of the nation had been put at stake”.

The prime minister said the people had been elected on the PTI seats or the reserved seats, and then sold out their conscience for the sake of few million rupees, adding that they would ensure a life time ban for such ‘traitors’.

He said these elements were “traitors” to the nation, to the country and to the coming generations, adding that unless they were punished, they would continue bargaining over the democracy for petty monetary gains.

The prime minister said with such a trend, any foreign country could purchase the loyalties of the lawmakers and topple an elected government. He resolved that they would fully confront them legally.

“All those are traitors who have played a part in the foreign conspiracy,” he said and added that the entire nation would resist such trends as it was a defining moment, and would not let the conspiracy succeed as it had periled country’s future and democracy.

The prime minister also called upon his party workers to stage daily but peaceful protests against these “traitors” and informed that tonight, he would be attending a protest gathering at F-9 Park in Islamabad.

During his day-long visit to Punjab capital, the premier also met with PML-Q leaders Chaudhry Pervez Elahi and Chaudhry Moonis Elahi who called on him at the Governor’s House. They discussed the current political situation in the country and matters of mutual interest.